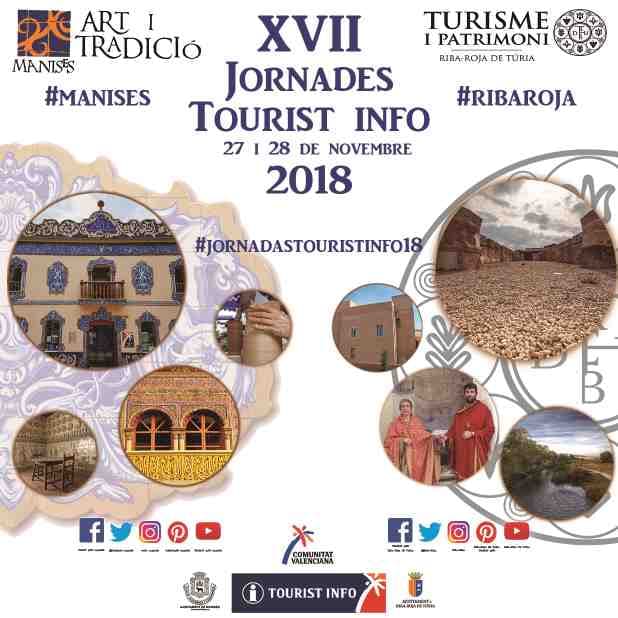 Manises and Riba-roja de Túria hosted the “17th Tourist Info Network Seminar”, directed at technicians and informants in tourist information offices, and organized by the ourism Agency of the Government of the Autonomous Community of Valencia, on 27 and 28 November 2018.

This event, which is held annually, brought together over 120 experts and workers in the network of Tourist Information Offices of the provinces of Castellón, Valencia and Alicante.

The aim of this event is to inform the Network of the different tourism products and heritage of the host municipalities, as well as to share the work experience of all the tourist information offices and statistical data analysis and to improve the quality of the service.

On Tuesday, 27 November, the activities focused on Manises, starting with a welcome reception for the attendants, followed by a tour of the city with visits to several places of interest, including some workshops where participants could enjoy the experience of manipulating clay.

In the course of the tour, they visited:

La Cerámica Valenciana, a workshop founded at the beginning of the twentieth century on a fifteenth century pottery in the Obradores neighbourhood. Apart from visiting the factory-museum, the party was also invited to observe the production process of ceramics.

La Asociación Valenciana de Cerámica AVEC-GREMIO provided a tour of the association’s facilities and participants were given the opportunity to try their hand at the following ceramic practices:

In Domanises, artist Juan Carlos Iñesta’s workshop, as well as being given an explanation of the production process, a creative plastic practice was demonstrated.

The tour likewise included a visit to Manises Ceramics Museum, located in an old eighteenth century house, where participants were shown the link between Manises and ceramics by means of a tour starting in the fourteenth century and taking them right up to the present. In addition, they visited the ‘Filtros y Sinaís’ and ‘Manises y Paterna’ temporary exhibitions.

In the afternoon, the seminar continued with the prize-giving ceremony of the Tourist Info Network Innovation Award 2018. A training session also took place and addressed several subjects of interest for the experts attending such as those discussed in the talk on CreaTurisme, and Intelligent Tourist Destinations. A quality committee was also set up.

This first seminar ended with a dinner in Restaurante Montemayor in Manises where typical dishes using Valencia’s garden-fresh produce were served up and those attending were invited to take part in a photocall showing typical Valencian phrases associated with ceramics.

On 28 November, the participants moved to Riba-roja, where they went on a guided tour to the Castle and took part in historical re-enactment at the site of Pla de Nadal. Finally, chef Joan Clement was in charge of preparing the Visigoth Menu which brought this Tourist Info Network Seminar to a close.