Lustreware is a ceramic technique that has been used in Manises since the fourteenth century. The first known written references (1326) describe it as “opus aureum”, that is, golden work.

It was widely recognized in Europe as can be appreciated in the book by Brother Francesc Eiximenis Regiment de la Cosa Publica (1383), which lists the wonders of Valencia, and points out:

“Indeed, above all is the beauty of the golden work from Manises, masterfully painted, and which has enamoured everybody to such an extent that the pope, the cardinals and princes of the world seek it out for its special appeal and are astounded that such excellent and noble work can be made from clay”. 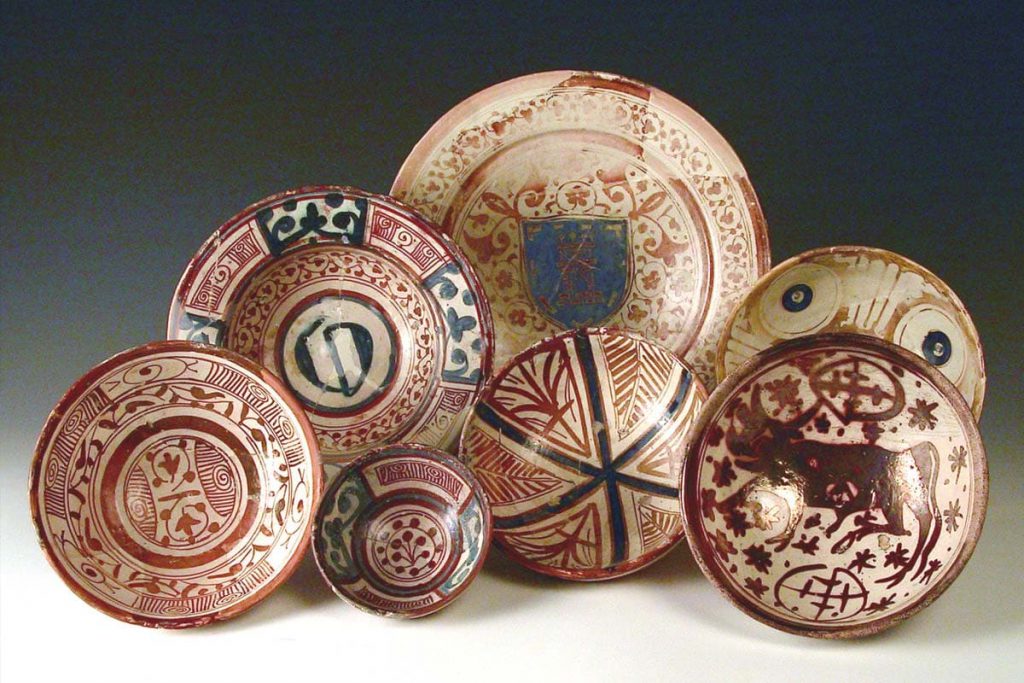 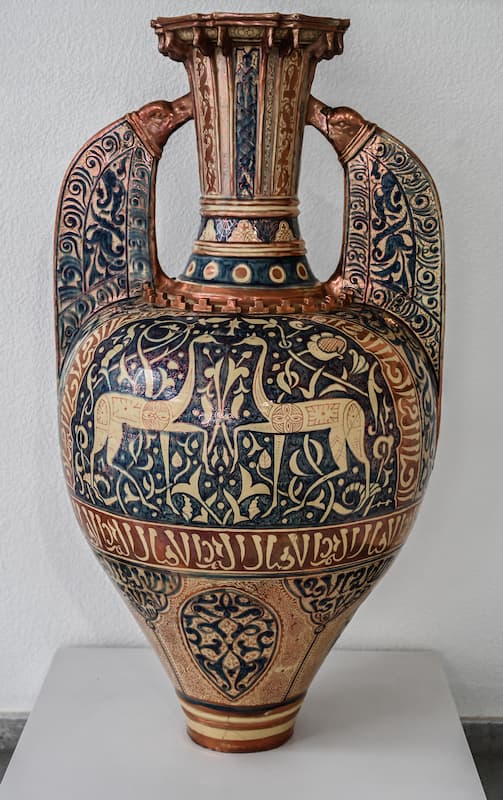 Fascination with this pottery stems from its origin as a difficult technique and was already admired since it began to spread through the Abbasid Caliphate of Bagdad.

The composition of its pigment, a mixture of silver and copper compounds, are reported in Eastern treatises from the eleventh and thirteenth centuries. In all probability,  the imitation of gold and silver on tableware in the Byzantine court encouraged the caliphs to promote its production given that the use of precious metals for eating and drinking is discouraged in the Koran.   It is known that, from the ninth century onwards, it became a high-representation product and was used to richly decorate the palaces of Samarra in Iraq and that of Sabra al-Mansuriya, or the mosque of Kairouan in Tunisia, with golden tiles. From the eleventh century, its production was promoted in Al-Andalus, in the  Taifa kingdoms of Seville and Zaragoza, though it subsequently achieved fame in Murcia, Granada and Malaga, cities which produced the masters who started its production in the kingdom of Valencia. In Manises, we can find master potters with the surname Al-Murcí in the fourteenth century and who made “work in painted clay similar to that from Malaga” “with golden paint typical of said work”.

Lustreware is a thin film of metallic particles which form on the ceramic glaze and, in the case of Manises, traditionally, over a lead and tin glaze. In Valencian pottery, it was prepared with a pigment that contained silver and copper, cinnabar and ochre, all of which dissolved in vinegar, it was painted with a brush or a bird feather and reduction fired. By using microscopic analytical techniques, we can appreciate how, following the firing, the particles are distributed in different sizes and concentrations in the glaze, forming several micrometre levels.

This structure creates a shimmering, metallic and iridescent reflectance which changes colour depending on the light it reflects.

It can likewise show several colours, an effect caused by the density of the pigment or the firing processes which cause changes in the concentration of the particles, for example, between the edges and the middle of a brush stroke.

The different proportions in oxides in the pigment before its firing, with more or less silver, and even the differences in the composition of the glazing, can also bring about changes in its colour, shine or iridescence. 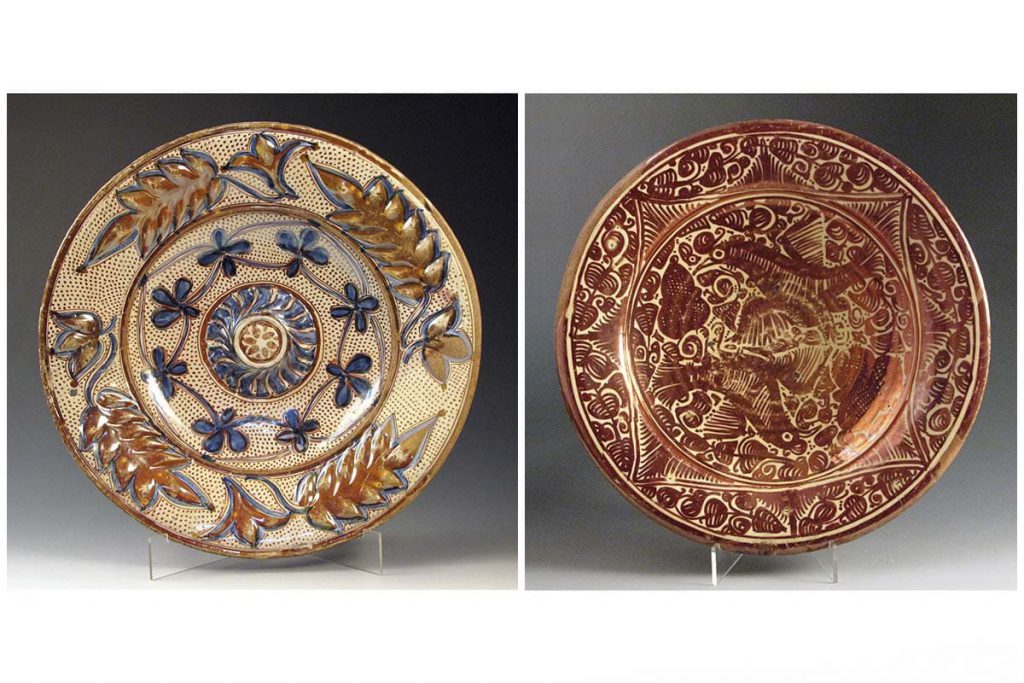 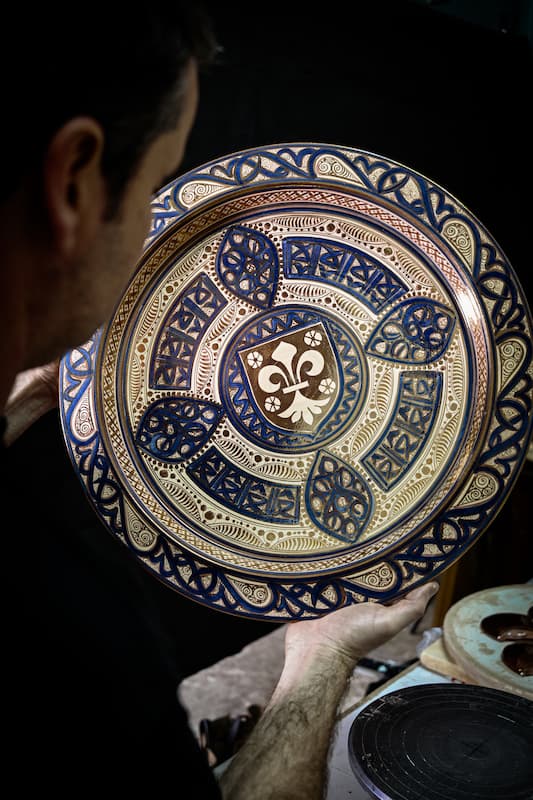 The size of the particles, the number of levels in which they are concentrated, and their depth depend on factors like the composition of the glazing, the temperature applied and the way in which the firing was completed.

Though it is possible to obtain lustreware in a controlled environment, it is difficult to get perfectly uniform results, even more so in craftworking conditions. Empirically, throughout the centuries-long Valencian experience, the production of lustreware has been based on three main factors: the use of an oven that works in a reduction atmosphere, the composition of the pigment and the way in which it is prepared and, last of all, the procedure used for its reduction firing. Down through the centuries, Manises has used opacified tin glazes or, later on, glazes made up of only lead, silica and alumina and, as a result, it obtained both golden and copper-coloured glazes in later periods.

Manises lustreware was a pottery-type which, in medieval times, reached Fustat, Crimea, Moscow, Copenhagen, Bergen, even America, with Christopher Columbus.

It was commissioned by the kings and queens of Aragon, Sicily, Castile or France, by the nobility of all of Europe, Italian merchants and cardinals, and remained the most admired pottery, the secret to which the potters of Manises were proud to possess right up to the end of the eighteenth century. Alcora used it in its formulas as ” Manises golden lustre” (1749).

Minister Floridablanca asked Mayor Martínez de Irujo to draw up a report entitled “On how to make the old golden lustre pottery from Manises ” and thus spread it to other places (1785).

In the nineteenth century, it was recognized by antiquarians, scholars and collectors, and its technique was preserved by two potters called Juan Bautista Casañ and Juan Bautista Torrent who ensured its survival and recovery by Manises’ new ceramists, the promoters of local industry. The latter would demonstrate their skill by creating replicas of the Alhambra vases at the end of the nineteenth century.

Nowadays, Manises upholds lustreware as a sign of identity and a living technique used by some of its internationally known ceramists. The city holds exhibitions and organises meetings to promote it and provides support for research and for its diffusion through audio-visual productions and new technologies. 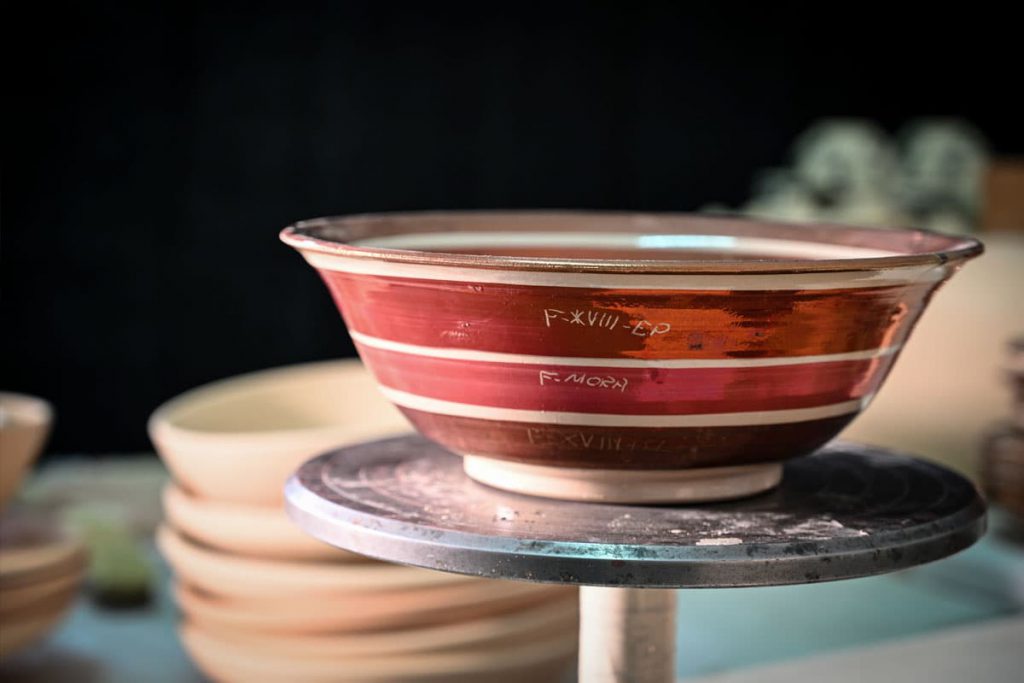